“Kashmir Issue – Article 35a and 370 of Indian Constitution; Options for Pakistan vis Rising Hindutva in India”

The seminar was aimed to bring academicians, policy makers and media to put emphasis on the brutalities encountered by Indian Occupied Kashmiris and to identify and explore the entailing policy options that Pakistan should adapt to address the situation.

Vice Admiral Abdul Aleem HI(M), Director General, National Institute of Maritime Affairs, in his welcome address talked about the “Special Status” of Kashmiris as well as, depriving citizenship status of certain segments of Indian Muslims which is an obvious evidence of emerging face of Indian fascism.

While talking to participants, Admiral Shahid Karimullah NI(M) appreciated the efforts of the management of the National Institute of Maritime Affairs for creating awareness about Kashmir issue. He further expressed that occupied Kashmir has been turned into the largest prison of the world, and the controversial Indian Constitutional bill will just further ruin India. He also stated that Pakistan strongly condemns Indian atrocities in Indian Occupied Kashmir and emphasized to be resolved in accordance with UN resolution and demand of Kashmiris.

“Plebiscite is the only solution to Kashmir,” Raja Farooq Haider, Prime Minister Azad Jammu and Kashmir said while addressing the audience. He further said that Pakistan has always projected Kashmiris’ demand for plebiscite in Jammu and Kashmir and we should devise a new policy to achieve our goal.”

Admiral Zafar Mahmood Abbasi NI(M), Chief of Naval Staff, enunciated his gratitude to the National Institute of Maritime Affairs for their efforts in making this seminar a success. He alleged that India’s move to change the status of the disputed state of Jammu and Kashmir is another manifestation of the Indian Government to promote Hindutva ideology, which is aimed at “saffronising” India and turning it into a Hindu-dominated “Hindustan”. He further stated that Kashmir being the core conflict between India and Pakistan has its severe implications on the security situation at sea. Pakistan Navy however is well aware of the resultant challenge and is ready and prepared to thwart enemy’s ill designs.

The seminar was attended by large number of dignitaries, Tri-services officers, academia, students and faculty of Bahria University, media representative, and researchers from local think tanks and universities. 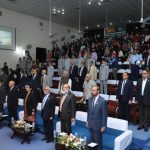 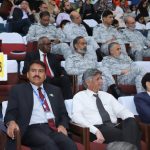 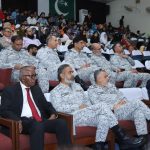 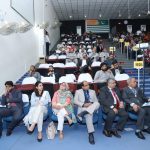 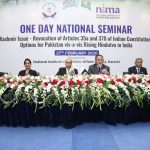 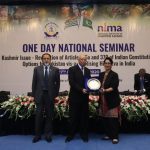 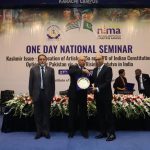 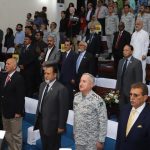 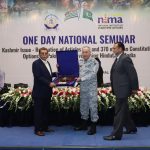 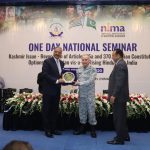 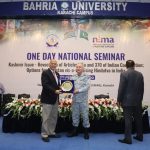 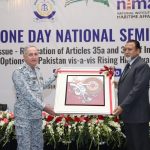 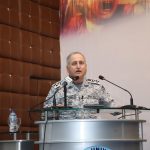 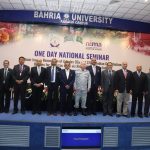