Adviser to the Prime Minister on Foreign Affairs Mr. Sartaj Aziz inaugurated the three day International Maritime Conference at the Pearl Continental hotel, Karachi. The National Centre for Maritime Policy Research (NCMPR) invited eminent scholars from Australia, Brazil, Canada, China, Malaysia, Sri Lanka, Thailand, UK and USA to deliberate on the topic “Strategic Outlook in The Indian Ocean Region 2030 and Beyond; Evolving Challenges and Strategies”. Chief of the Naval Staff Admiral Muhammad Zakaullah NI(M) in his opening remarks welcomed all guests and highlighted the significant role being played by Pakistan Navy in sustenance of peace and stability in the Indian Ocean Region. He said the operationalization of CPEC and Gwadar Port would lead to an exponential increase in maritime activities off our coast. Consequently, responsibilities of Pakistan Navy for maintaining secure maritime environment will also increase manifold. Recent raising of TF-88 is also a step forward in this regard.

While addressing the audience, Adviser to the Prime Minister of Foreign Affairs emphasized on the importance of uninterrupted use of seas for the common good. He further stated that marine environment is also an essential component of global life support system. Investing in marine eco-system can help us improve ocean management. In the end, he assured unstinted support of the Government for the development of maritime sector.

Earlier, President Azad Jammu & Kashmir, Ambassador (Retd) Sardar Masood Khan addressed the gathering as keynote speaker. He emphasized on the challenges and opportunities of geo-political and economic trends in the Indian Ocean Region. 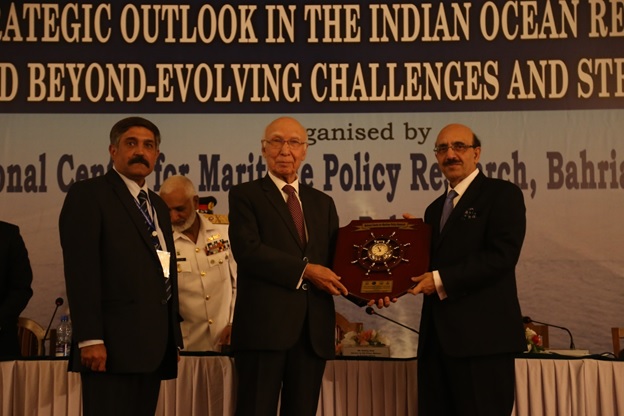 The International Maritime Conference, which is being held in tandem with biennial Naval Exercise AMAN-17, has become one of the most prestigious maritime events in Pakistan. Its conduct by NCMPR, to deliberate the much-neglected issues of maritime security is a praiseworthy effort and will positively contribute towards highlighting the role of Pakistan in regional and international arena.

Maritime economy and environment remained in focus on the second day of the 7th International Maritime Conference 2017 held on “Strategic Outlook in the Indian Ocean Region, 2030 and Beyond: Evolving Challenges and Strategies”. The first speaker of the day, Rear Admiral (Retd) Pervaiz Asghar HI(M) expressed his thoughts on emerging opportunities in the Indian Ocean trade regime.

The following session of the day was on the theme of Marine Environment in which Dr. Wang Dakui from China emphasized on having a cooperative mechanism for Indian Ocean Region to deal with environmental hazards and early warning risk assessment. Dr. Steen Christensen, from IUCN, shed light on regional collaboration amongst countries in the Indian Ocean for better coastal management and ocean governance.

The 7th International Maritime Conference is being held in tandem with the 5th biennial multinational Naval Exercise AMAN-17. The events are being attended by more than 35 Navies including eminent speakers and delegations from across the globe. 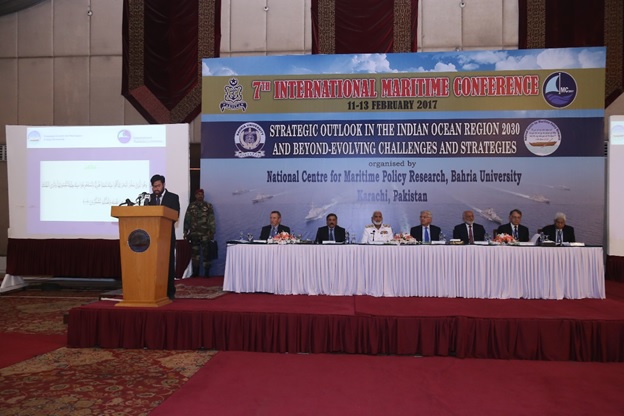 “Pakistan has a key role to play in the emerging strategic outlook in the Indian Ocean” said Defence Minister of Pakistan, Mr. Khawaja Muhammad Asif at the closing ceremony of 7th International Maritime Conference organized by National Centre for Maritime Policy Research (NCMPR). The International Maritime Conference concluded after 3 days of deliberations on maritime security, economy and marine environment. Mix of public and private sector participants from Pakistan and around the world created an ideal opportunity for the exchange of ideas. 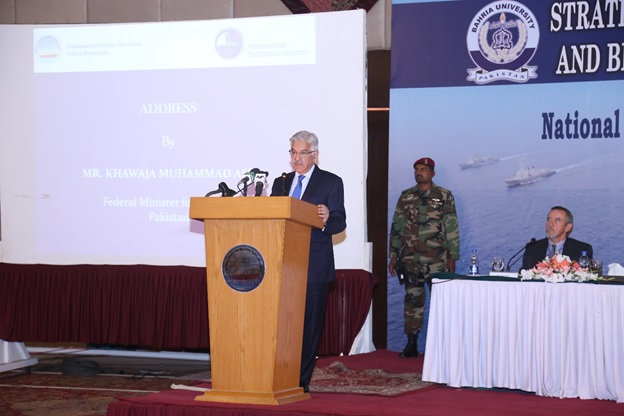 While addressing the audience, the chief guest of the event Defence Minister of Pakistan Mr. Khawaja Muhammad Asif stated that the Indian Ocean has emerged as a centre of global geopolitics due to innate strategic and economic interests of regional and global players. He emphasized that security of Sea Lines of Communication is the key to regional and global economic prosperity. He expressed his confidence that deliberations during the conference and its valuable recommendations will guide the maritime stakeholders in effective policy making. At the end of his speech, he thanked Chief of Naval Staff and congratulated NCMPR for successful conduct of the conference.

Chief of the Naval Staff Admiral Muhammad Zakaullah NI(M) in his closing remarks highlighted the increased reliance and connectivity through maritime routes under One Belt-One Road initiative. He remarked that revival of ancient silk route through advent of China-Pakistan Economic Corridor and its associated projects will pave the way for blue economy prospects in the region. He emphasized that access to open seas is of vital importance for energy needs, economy and development and Pakistan can ill afford to neglect the development of maritime sector.

The Defence Minister also congratulated the students of Bahria University and NCMPR who won the article and poster competition held on the sidelines of the Conference and distributed prizes.