A whole encompassing seminar on ‘CPEC’ was conducted under arrangement Department of Management Sciences, Karachi on 30 November 2016 at Al-Beruni Auditorium of the Campus to make aware the participants of the project in depth, promote ownership of the project among the youth/students of business management and suggest the right direction to the architect and manager of this project. Three learned speakers spoke on the subject as under:-

Seminar was moderated by Dr. Bashir Ahmed, PGP Coordinator of Management Science Department. Proceeding of the seminar started with recitation from Holy Quran by Dr. Rafiq Ahmad Khan followed by welcome note by Professor Dr. Mustaghis-Ur-Rahaman, HOD-MS. While welcoming the guests and speakers Dr. Rahman highlighted the importance of this seminar and set the scene by raising questions related to the project such as whether this project will bring peace and security to the region? Will it alleviate poverty in South Asia? Will CPEC be helpful in industrial development in the country? And will the built corridor be playing crucial role in knitting together the communities all across Pakistan? At the end, he expressed hope that the panelist would respond to the questions raised to meet the objective of this seminar.

Thereafter the first speaker Vice Admiral (R) Asaf Humayun (HIM) covered maritime security challenges that are likely to be met through collective efforts of China and Pakistan. Following aspects of maritime security were amply covered:

Admiral Humayun rightly highlighted that due to CPEC and with presence of PLA (Navy) in the region, USA and India are worried due to creation of strategic balance in favour of China. Hence, in the developing situation, the three maritime powers i.e. USA, India and China are most likely to continue to seek the best advantageous course for their own progress, realising the interdependence of the region and not pose direct threats to the security of the IOR. As such, an armed conflict amongst the major powers would be a disastrous and at the same time most unlikely one.  Nevertheless, the US and China currently have a tenuous relationship in the Western Pacific and their interaction in the IOR will follow similar pattern. As far as Pakistan is concerned, its maritime power is likely to strengthened, with due support from China, to be able to ensure safety of maritime traffic in Pakistani territorial waters.

The second speaker Mr. Majyd Aziz, a renowned business leader and Former President Karachi Chamber of Commerce, spoke on the topic “CPEC and Industrial Development”. During his lively talk, mixed with poetry, he said that from Pakistani perspective, there are three main stakeholders of CPEC i.e. Government, Private sector and People of Baluchistan. As far as industrial development is concerned, he was of the opinion that CPEC has created a great hope not only for existing industrialists but also for forthcoming entrepreneurs, who can find tremendous potential for establishing new industries. He emphasized that private sector needs to be geared up for reaping a number of opportunities emerging due to CPEC and play its role in national economic development. Following are the salient opportunities available to private sector:

Third speaker of the event was Mr. Syed Hasan Javed Ambassador (R), who lived in China for over 10 years. He began his discussion with a small incident that highlights positive view of China towards Pakistan; the visiting US President ‘Bill Clinton’ in his meeting with the Chinese President Jiang Zemin in 1996, asked him to stop military assistance to Pakistan, the reply of the Chinese leader was: “ We Chinese have a tradition that when we drink water from a well, we always remember the one who dug up the well”.

He was appreciative of the Chinese positive attitude towards Pakistan and was highly optimistic about the development and prosperity that is going to come in Pakistan, along with huge CPEC project. He repeated the most often quoted metaphor: Pak-China friendship is sweeter than honey, higher than Mountains and deeper than the Oceans. Narrating and appreciating the fast paced progress that China has made during past few decades, he emphasized on the Pakistani youth to develop habit of hard work and excel in respective professional areas. His talk became somewhat emotional and indeed inspirational for the young students who highly applauded the speaker for his personal contribution towards making CPEC a true success.

In the context of education cooperation, China has decided enhance cooperation and extend following facilities to people of Pakistan:

For successful acquisition of all opportunities, Mr. Hassan stressed that we Pakistanis need to set our house in order by ensuring fair dealings and improving our governance. He concluded his long presentation by saying that while huge inflow of FDI shall improve economic health of the country, extensive business activity in the country shall create enormous job opportunities for the youth of Pakistan. He asked young students to get ready and grab this emerging opportunity.

The seminar was concluded by Prof. Dr. Mustaghis-ur-Rahman. He observed that the discourse undertaken by the panelists was much needed and the success of this event can be giuaged by the fact that the participants gave patient listening to the speakers for about three hours. In his view, all the questions raised at the start have been responded in elaborated fashion. Director Karachi Campus, Commodore Mohsin Hayat Malik (HI) presented vote of thanks and at the end of the program Director General Karachi Campus, Vice Admiral Khawaja Ghazanfar Hussain (R) HIM presented the event memento to the panelists. 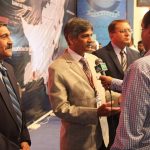 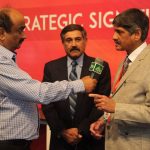 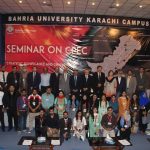 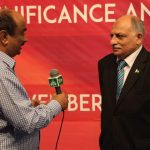 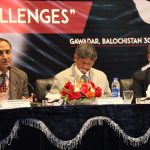 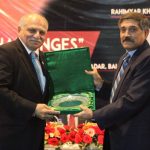 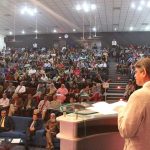 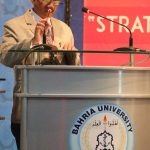 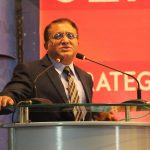 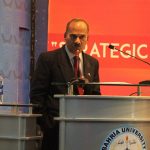 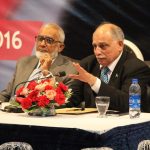 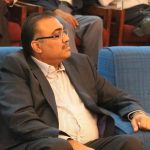 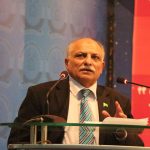 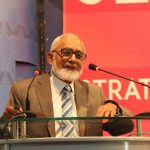 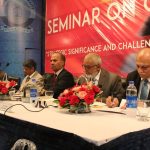 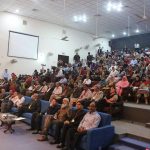 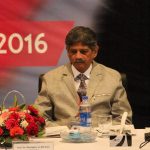 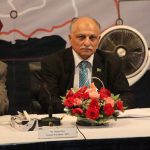 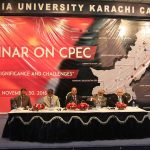