The Imagine Cup is a global competition that empowers and encourages students from the field of Computer Science and Software Engineering to form a team and create applications that shape how we live, work and play. It plays host to thousands of students from all around the world each year. This year, more than 130 teams all over Pakistan competed for the Regional Finals. Out of these only 23 teams made it to the National finals from the leading Universities of the country, NED UET, UET Lahore, FAST, IBA, DHA SUFFA, NUST and Bahria University to name a few. In these 23 teams, “Positive Zero”, a team comprising of the students from the department of Computer & Software Engineering, Bahria University, Karachi Campus, H.M Faraz Ali Talpur, M. Inzimam Abbasi and M. Rizwan Munir won the national finals. The national finals were held in the HEC Headquarters on 14th April 2017, whereas winner announcement ceremony was held on 26th April 2017 at the same venue. The chief guest of the event was Ahsan Iqbal, Minister of Planning and Development of Pakistan and the Deputy Chairman of Planning Commission of Pakistan, Chairman HEC, Microsoft Pakistan Head, MEA Manager. They presented shields and certificates to the winning students. These students are now going to represent Pakistan in the Middle East-Africa (MEA) Finals which will be held in Beirut, Lebanon on 18th – 20th May, 2017. 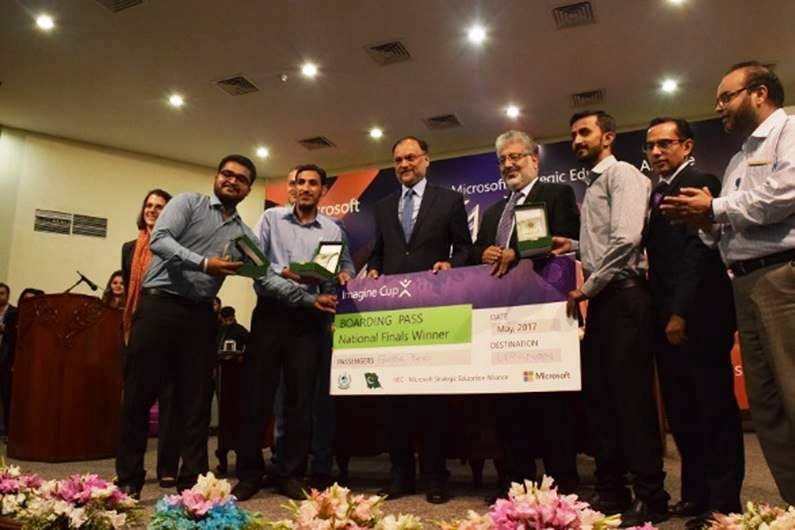