AWARENESS WORKSHOP ON PAKISTAN MOBILE APP AWARDS 2016
Category: Past Events
Published on: May 24, 2016 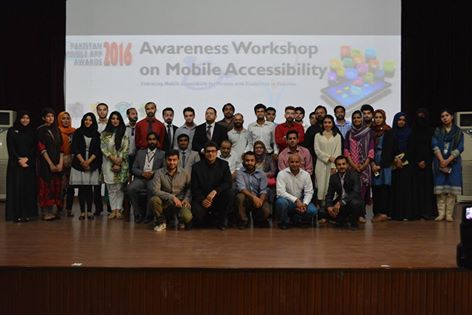 The theme of this year was “Embracing Mobile Accessibility”, which aims to focus on the development of mobile applications on the needs of Persons with Disabilities (PWDs) in Pakistan.

This session had different parameters mainly, details of Awards and procedures to apply, Ideas , Sharing of Inspirational stories and Mentoring by Guest speakers.

Mr. Wasih-Ullah-Khan (D.G. Coordinator P.T.A) was the chief guest in the event.

Various universities Including NUST & IIUI were invited and they enthusiastically participated in the event. Head of departments from different departments of Bahria University supported the event and huge participation was shown from Management sciences, Software engineering, Computer engineering, and Social sciences.

About 300 to 400 people attended the event which was highly appreciated by the Director Campus BU and director ORIC BU, it was announced that Bahria University is the first university to become official partner with Pakistan Telecommunication Authority (PTA) in the Pakistan mobile app Awards that is leading to the competition for mobile applications development.

Following are the awards announced for the participants:

This event came up to be a very successful unity patch in which visions of all these organizations became clearer by joining hands and working together in future.